Since 2019, CoachAccountable has allowed you to issue and manage Agreements with your individual clients (think contracts and other such documents that beg signatures, initials, time stamps and so forth).

In addition to managing Agreements with your individual clients, you can use CA to manage them with your client companies.  This allows you to issue contracts to key company personnel to formalize your working arrangements with the companies that hire you.

If you wish to issue Agreements to a Company you are working with, the first step is to be certain you’ve got one or more personnel of the company who are allowed to be party to agreements for that company.  This is done by setting the permissions for a given personnel, like so: 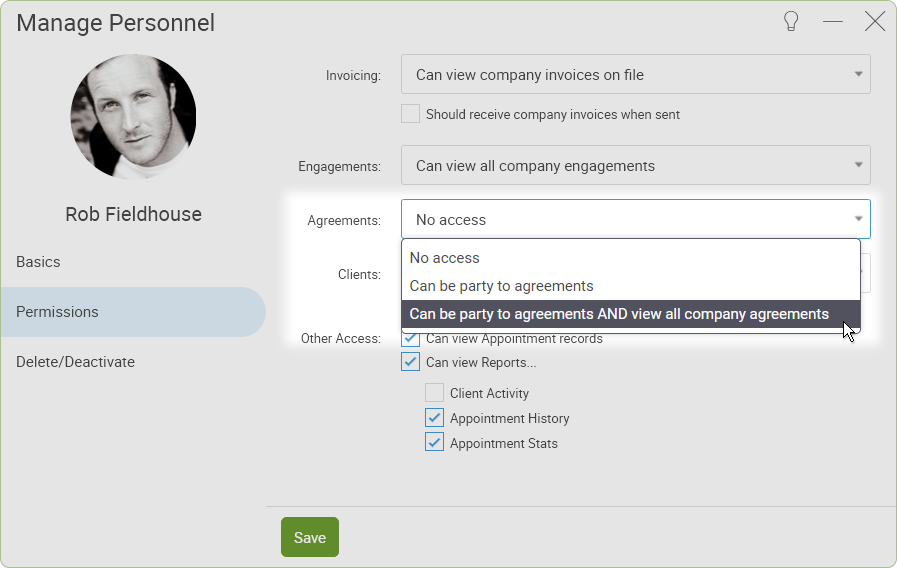 There are 3 levels for a Personnel's Agreements access.  Either the second or third will do.

Once you’ve got a personnel who can be on the receiving end of a Company Agreement, you’re all set to issue one.

Because companies are apt to accrue more of a collection of agreements on file than an individual client typically would, Agreements for companies have their own section on a Company Page: 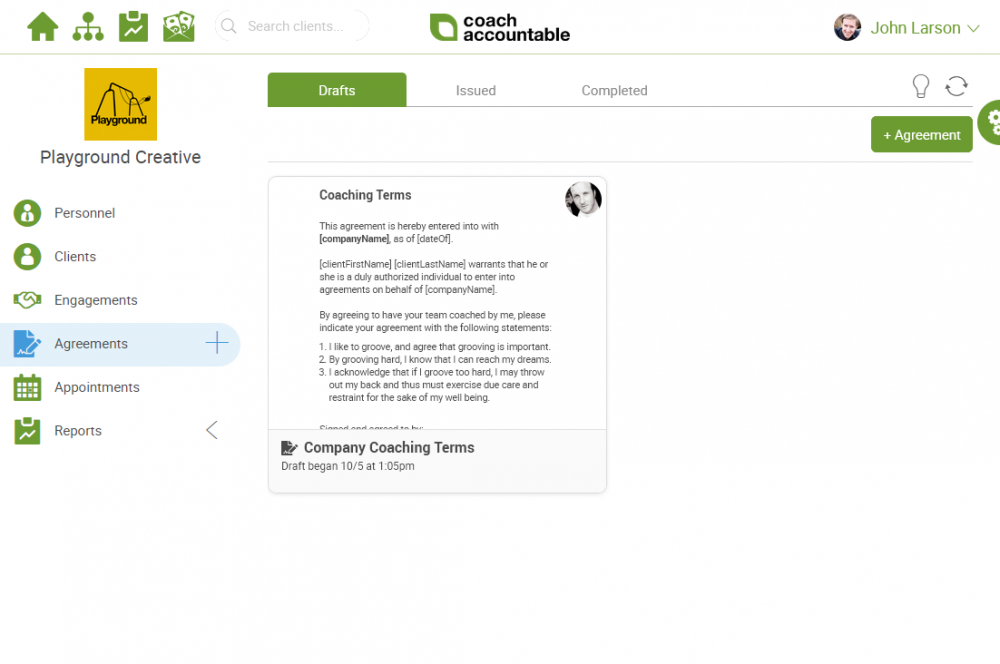 Three sections for the 3 phases of a Company Agreement: draft, issued to the company, and completed by the designated personnel.

Issuing an Agreement to a company is about what you’d expect: clicking the +Agreement button brings up the editor, from which you can choose from your Agreement Templates as a starting point: 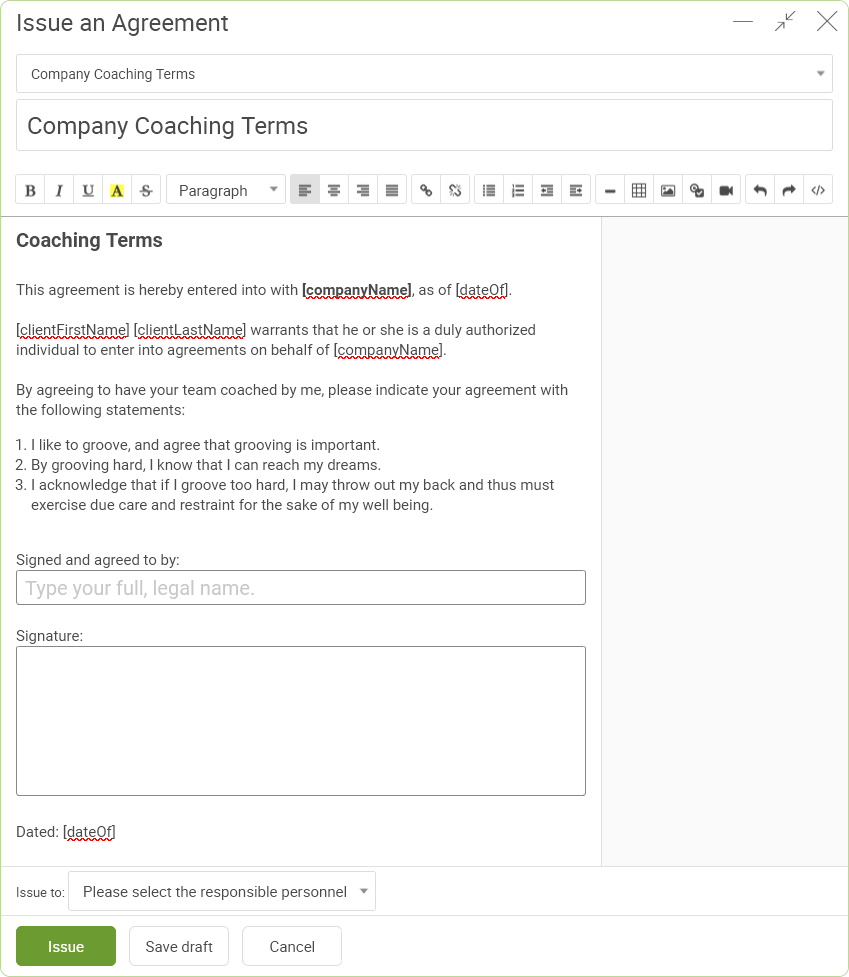 You’re able to keep a Company Agreement in mere draft form while working on it, perhaps over several sessions.  Whenever it’s ready, click the “Issue” button to actually issue the finalized agreement to the designated personnel.

When you do, CoachAccountable will offer you the option to send a notification: 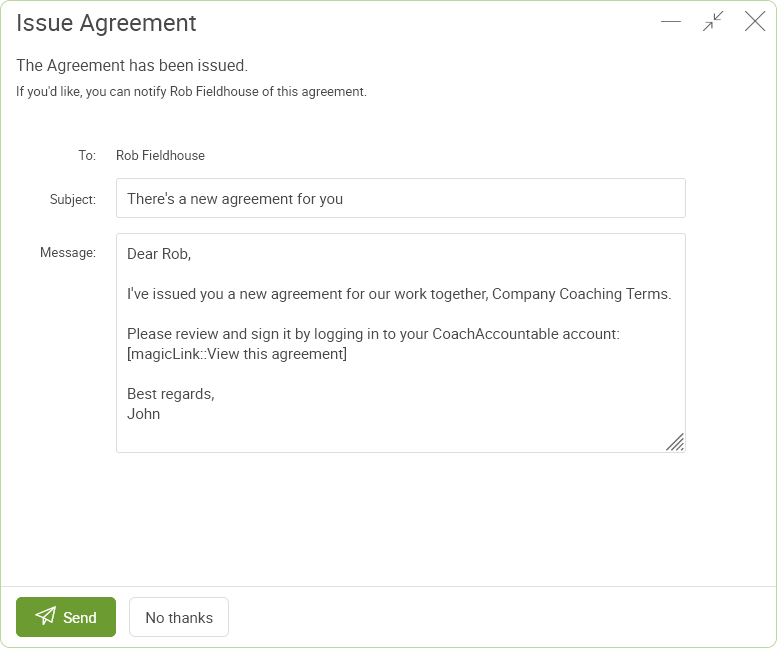 This is usually a good idea, and the [magicLink] will bring them right to it.
To change the default verbiage of this notification message, find it in Settings >> System >> Message Templates, under the new “Agreement Notification” template.

That template is just a starting point: you can further edit what appears here prior to sending.

Once issued, it’s still possible to make last minute modifications to the agreement, including to whom it is issued.  But once the person who you’ve issued it to has logged in (and thus ostensibly accessed it), edits will no longer be allowed.  In that case, you can simply delete and re-issue a new agreement.

Agreements that have not yet been agreed to will remain in the “Issued” tab, and once agreed to they’ll be found in the “Completed” tab.

For agreements that have been issued but not yet agreed to, you can bring up the editor and click the send button (found in the lower right to send) another notification.  This a nice way to gently remind and nudge someone towards addressing the outstanding agreement.

Once completed by the designated personnel, whomever originally issued it will be notified of as much (assuming they’ve opted to receive agreement notifications, as found in Settings >> System >> Notifications).  Other members of the team who are
set to receive notifications of all agreements will be similarly notified.
Completed company agreements will live in the Completed tab of the Agreements area, visible to both the coaching team as well as the company personnel who have been granted access to agreements (either their just own, or all company agreements).
Back to Companies