Metrics remain one of the most powerful pieces of the entire CoachAccountable system: they make progress real, reveal hidden insights, and cause clients to be engaged at a very high and regular level.
There are four types of Metrics that are commonly employed: Cumulative, Measurement, Rating and Binary.  Each flavor has its own characteristic setup, and each best fits its own separate set of outcomes worth tracking.
Acquainting yourself with these four metrics allows you to better utilize this powerful feature in order to better serve your clients.

Cumulative is the type of Metric that typically starts at zero and builds towards some accumulated total amount.  This is really common and handy for tracking long term performance goals in arenas like sales and other such measurable productivity.
The target trend line of a Cumulative Metric gives a day-by-day visual approximation of when performance is ahead of schedule and when it is lagging behind.  This is quite nice for honing in on what’s really working as well as identifying when goals are turning out to be off, either too easy or wholly unrealistic.
To create a Cumulative Metric the key is to choose the “cumulative” option for the Data Entry setting.  Then make suitable target values to match the goal.  Most often this will be zero to start, and an end target value of whatever you’re shooting for by the end of the Metric duration.  If for example the goal is $10,000 in sales over a 3 month period, you would set the Metric to last for 3 months and have the target values be zero to start and $10,000 to end.
Here’s what the setup of the example Metric above looks like: 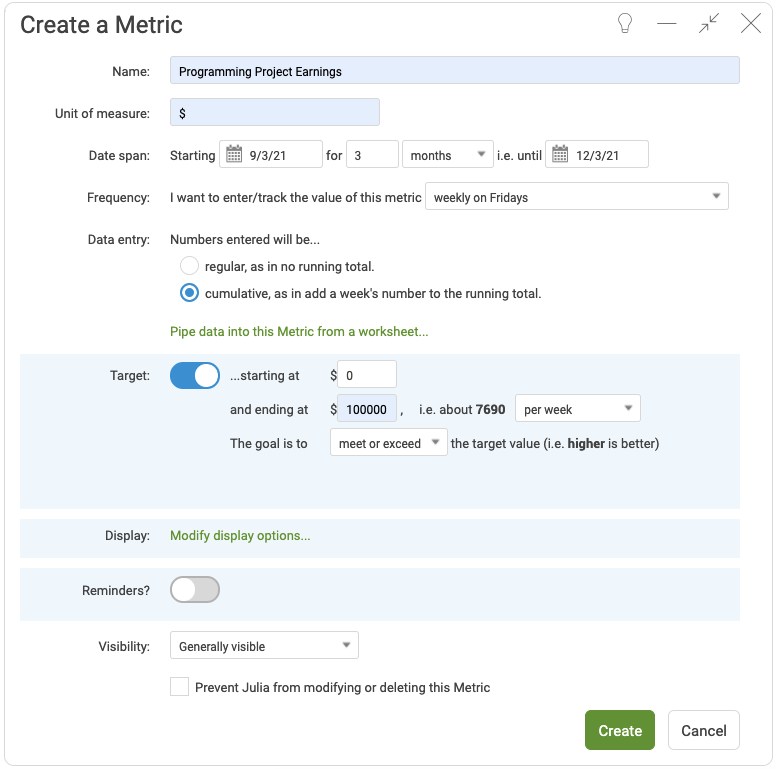 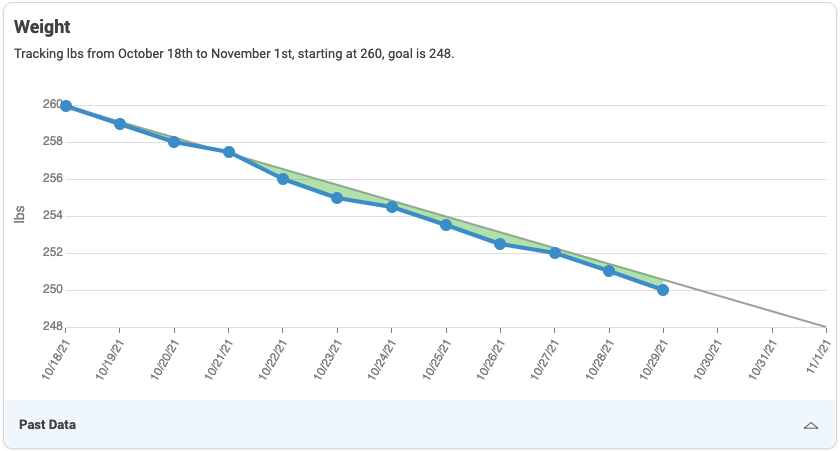 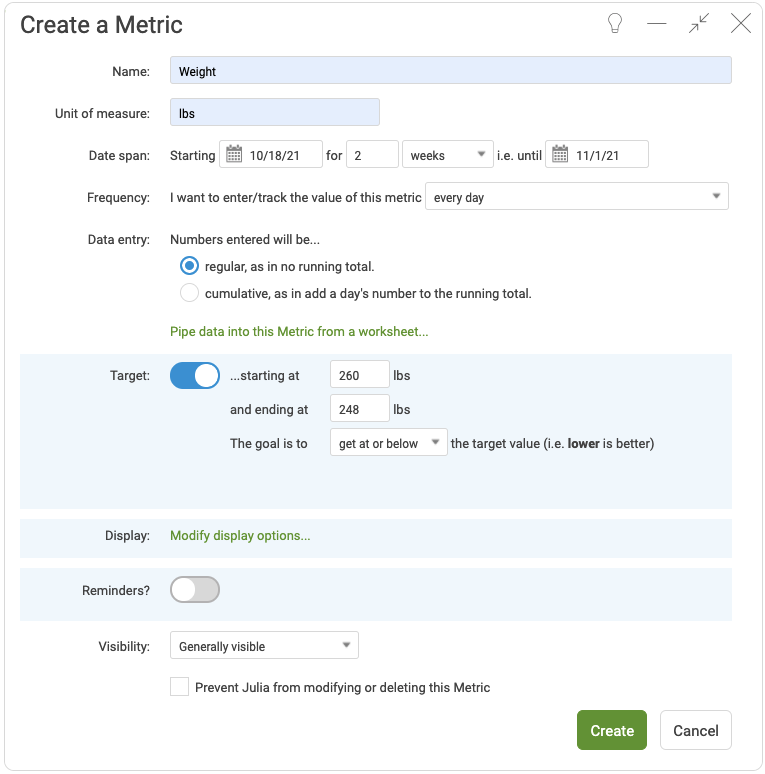 In contrast to Measurement Metrics which are concerned with real-world measurable values, Rating Metrics are made up of scales and subjective numbers that nevertheless give meaning and track-ability to the less tangible.
Things like “managerial effectiveness”, “confidence on sales calls”, “degree of overwhelm”, and “sense of well-being” are all subjective, yet they are still of vital concern when coaching individuals towards their desired outcomes.  By creating a scale and guiding your clients to weigh in regularly with their subjective assessments you gain a rather useful foothold into coaching and influencing these important intangibles.  When tracked over time, and especially when annotated with comments, a Rating Metric invariably tells a real story about how these subjective aspects are going, and gives you as coach a useful area to focus on.
To create a Rating Metric simply decide on what scale you’d like your clients to rate on. 1 through 10 is a very common one that everyone is familiar with. You might include this range in the name of the Metric (e.g. “Managerial Effectiveness on a Scale of 1 to 10”).
Once you pick your scale you then pick a number that nicely represents a sort of “minimum acceptable” value, as if to say “this value is okay, anything above this is a win, and anything below tells us we should look to improve”.  Set both your starting and ending target values to this threshold:
A common mistake is to setup a Rating Metric with zero for a starting target, and 10 as the ending one (or whatever value is the top of your scale).  This isn’t ideal because visually what you’re saying, in essence, is that the bar is too low to trip over when you’re getting started, but then gradually gets to only a perfect 10 being okay.
You can play with the target values to be whatever fits your style and actual goals. Typically a fixed target would be used throughout but it might be the case that you start with a 4 being okay and the game is to have your client view a 7 as the new standard of okay by the end of the Metric.  Just make sure that your target values make sense as the real (an attainable!) goals throughout the period of time that you’ll be tracking.
The setup of the Rating Metric looks like this. "Points" are recommended as the unit of measure.  The “on a Scale of 1 to 10” doesn’t have to be there in the name, but it’s a nice cue to remind the client how to report his or her values: 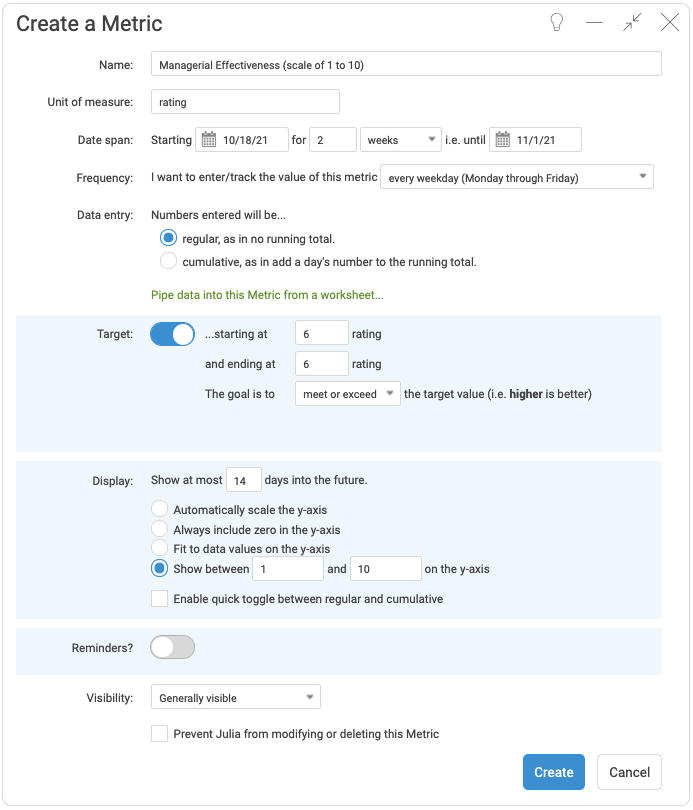 In many cases it’s useful simply to track regular practices in terms of a simple “did you do it, or did you not?”  This is where a Binary Metric comes in handy, where “binary” is just a fancy way of signifying that something is ”zero or one”, “on or off”, or “yes or no”.
Binary Metrics are by far the least obvious use of Metrics, but like the others they enable a commonly useful type of tracking.  Binary Metrics are a good way to ingrain regular habits into your clients like exercising daily, sticking to a nutrition plan, doing prescribed rituals, and so on.
To setup a Binary Metric the most important thing actually is to let your client know that he or she should report numbers as a one or a zero, one for yes and zero for no. Set target values to 0.5 to start, and 0.5 to end. It may seem nonsensical at first, but setting a flat line for the target that’s halfway between zero and one leads to a visually nice graph where the “yeses” are shaded with a favorable green and the “nos” are in an unfavorable red.
(This assumes that yes is good: with a Binary Metric like “Did you smoke today?” in a program trying to discourage smoking, for example, you would flip the goal setting to “get at or below” the target value, and thus flip the coloring scheme.)
A Binary Metric is as simple as that: just a nice scheme to document how much a regular practice is being followed-through upon which shows the history and trends in a very visual way.  The setup looks like this: 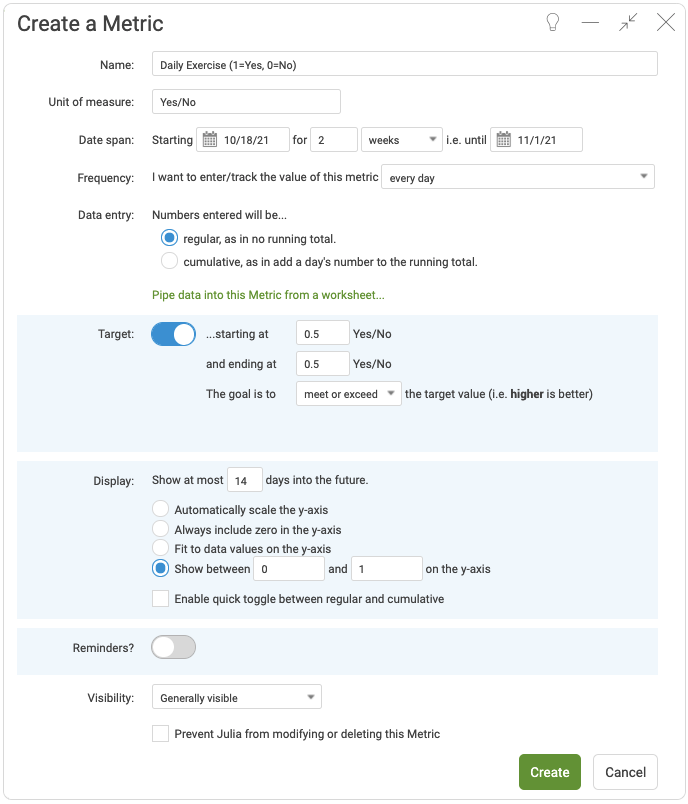 And there you have it: 4 commonly-employed types of Metrics, each with their own characteristic setups and each serving a different collection of things worth tracking during the course of a coaching relationship.
The great flexibility of Metrics is part of what makes them a little intimidating when you first set them up, but this flexibility is also what makes them so versatile for a broad range of outcomes tracking.  By employing a combination of these four types you’ll be able to track pretty much anything your clients are working on, and have them more engaged and satisfied with the process as a result.
Back to Metrics